Kyiv Armored Vehicle Factory, a state-owned company affiliated with the Ukroboronprom defense industries group, has completed initial on-road trials of its new command/staff vehicle, to be known as BTR-4KShT, which is built on the 8x8 BTR-4U chassis

The BTR-4KShT has been developed to meet the requirement of the Royal Navy of Thailand.

The prototype is slated for further upgrade that Kyiv AVF is going to do in partnership with the private firm NVK Chezara TechAviaCom. Enhancements will include a multi-target weapon station “Iva-M”, an intercom system, a battlefield management system switch, a situational awareness camera, and a driving support system.

The passenger compartment in the vehicle provides accommodation for a staff of 8 personnel.

The prototype BTR-4KShT vehicle is scheduled to be delivered as kit to Customer by year’s end.

It has been reported that the first BTR-3KSh was delivered as kit to Thailand in early 2019.

Meanwhile, Myanmar is planning to set up a licensed assembly line for BTR-4U vehicles, under a deal reported by Ukroboronprom in 2020 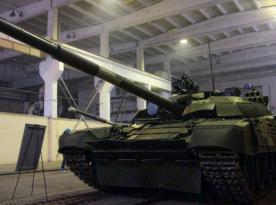