The President of Turkey Tayyip Erdogan has visited Kyiv today. Officials of the two countries signed a few agreements, one of them being a military framework deal between Ukraine and Turkey. The Minister of Defense Oleksii Reznikov was the signatory from the part of Ukraine. The contents of the document were ratified by the Ukrainian government yesterday, Feb. 2, 2022.

According to the agreement, Baykar Defence is to create a subsidiary company to realize its project on establishing a new plant for Bayraktar unmanned aerial vehicles assemblage, as well as centers for maintenance and modernization. Another condition exempts Turkish investors from income taxes from UAV production for 10 years.

Ukraine guarantees the inviolability of investments, establishes officials’ responsibility levels in order to prevent undermining the application of the project. Turkish investors will be able to receive land for a plant free of charge, with terms set to 49 years. Also, they are allowed to transfer UAV components duty-free. All the information about finance and personnel involved in the plant building project will be confidential.

The plans of building a new Baykar plant in Ukraine date back to July 2020 with the Ambassador of Turkey to Ukraine Yağmur Ahmet Güldere announcing Kyiv and Ankara were negotiating on UAV production in Ukraine. Throughout 2020 the process proceeded to the legal stage, with a memorandum between the two countries' ministries of defense having been signed. Defense Express had an explicit interview with Baykar Defence CEO Haluk Bayraktar on Ukraine-Turkey's most promising bilateral projects between Turkey and Ukraine.

In September 2021 the Minister of Foreign Affairs of Ukraine Dmytro Kuleba commented on the current state of negotiations, indicating that Ukraine is interested in accelerating this process. The Turkish company struggled to deal with all the export orders it received. At the same time, Ukraine had plans to build its UAV fleet. Thus a new plant would simultaneously boost the export capabilities of Baykar Defence and empower Ukrainian Armed Forces.

Aside from the new agreement, the Armed Forces of Ukraine are interested to reinforce their combat capabilities by purchasing more reconnaissance and strike drones Bayraktar TB2, in addition to the 12 ones the Ukrainian Army already has. The information was provided by Fahrettin Altun, the Communications Director in the Presidency of Turkiye in his interview with Bloomberg.

As Defense Express reported, Turkiye's President Recep Tayyip Erdogan had arrived in Ukraine on Thursday, February 03, for an official visit. Ukraine and Turkey are to take to a new level of cooperation in the economy and the sphere of high technology. 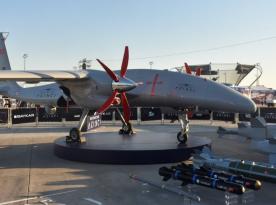