Which Weapons is the UK Sending to Ukraine (Video)

Prime Minister Boris Johnson on Tuesday set out a new £300m ($375m) package of support for Kyiv's military as he saluted the resistance of Ukrainians in the face of the Russian invasion during an address to the country's parliament.

Defense Express publish a look by Forces.NET British specialized source at what military aid the UK is sending.

What lethal aid has the UK sent so far?

The UK started by sending shoulder-mounted next generation light anti-tank weapons (NLAWs) which have been credited with helping to stall Moscow's armoured units.

The UK has since intensified the effort and is one of the largest arms suppliers in Europe to Kyiv.

Britain has now delivered more than 5,000 NLAWs and other anti-tank missiles, 1,360 anti-structure munitions, five air-defence systems with more than 100 missiles, and 4.5 tonnes of plastic explosives, according to the Ministry of Defence (MOD).

The Martlet is a weapon being tested by UK troops that is yet to be fully deployed by the UK Armed Forces.

What other military support has the UK provided to Ukraine?

Mr Wallace said the UK has already given some £200m in military aid to Kyiv.

The UK has also sent non-lethal equipment to Ukraine, including more than 90,000 ration packs, more than 10 pallets of medical equipment, more than 3,000 pieces of body armour, nearly 77,000 helmets and 3,000 pairs of boots, as well as communications equipment and ear defenders.

Britain is training Ukrainian troops in Poland, as well as teaching a small number of Ukrainian soldiers on home soil how to use armoured vehicles.

The UK, alongside Polish, US and international partners, has also set up an international donor co-ordination centre in Stuttgart to co-ordinate the delivery of military assistance.

What further military aid is the UK sending?

The UK Prime Minister on Tuesday, May 3, confirmed a new package of support worth £300m for Kyiv.

He said that "in the coming weeks", the UK will send longer-range Brimstone anti-ship missiles to help Ukraine counter Russian warships in the Black Sea.

He also said the UK will send a small number of Stormer armoured vehicles, which carry STARStreak anti-aircraft missiles and are designed to provide a roving threat to Russian planes and helicopters.

The Government also announced 13 armoured vehicles will start arriving in the country's east in the coming days to evacuate civilians from besieged areas and protect officials rebuilding critical infrastructure amid ongoing Russian bombardment.

A £100m package of high-grade military equipment announced by Mr Johnson earlier this month includes another 5,000 anti-tank missiles and high-tech precision munitions that loiter over the battlefield until directed to their target.

He also offered to send Challenger 2 tanks to neighbouring Poland so that Warsaw can donate its own to Ukraine. 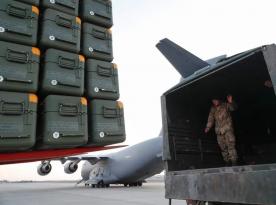 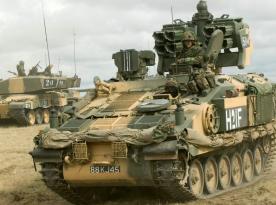 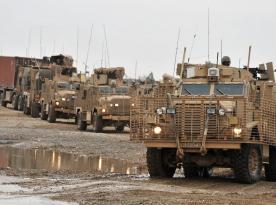