If slow barges with howitzers on them got overlooked by the occupiers on the island, that is another major failure of the russian Black Sea Fleet

A recent article by The New York Times tells about nuances of the supplies tending to the needs of the Ukrainian artillery. In particular, the text includes a description of an interesting way the Ukrainian military invented to reach the russian garrison on the occupied Zmiinyi (Snake) Island in the Black Sea.

According to the NYT, the Ukrainian artillerymen boarded some CAESAR self-propelled howitzers received from France on floating barges and deployed them 10 km from the mainland, in order for the artillery systems to fire on Zmiinyi Island from 50 km away right from the spot.

The details of the operation are not disclosed; generally speaking, this episode was mentioned rather as an example how the Ukrainian Army improvises when it lacks weapons to reach the occupiers otherwise.

The story itself of Ukrainian Caesars shelling russians from the barges amid the open sea deserves a closer look. In fact, there are some nuances to pay attention to.

For starters, such a mission would involve one or several large barges designed for coastal sea sailing. Therefore, it requires a tugboat to bring them to the designated spot. The cruising speed of such a "caravan" would be about 10 to 12 knots in good weather. That brings us to the point that firing on Zmiinyi Island would be a dangerous thing as long as such a slow and sizable object becomes an easy target for the russians.

The article provides some important details on how much time was allowed for the Caesars to complete the firing tasks on the barges and which equipment they carried. As we already know, France handed over to Ukraine Caesars a six-axis chassis with an ammunition stock of 18 rounds. Which raises up the question, whether there was additional ammunition carried on these barges, too.

As for the mission, we should keep in mind that regardless of the time of firing, it takes at least an hour for the barges to deploy to the position plus one more hour to draw back to the shore where they will be safe, protected by coastal artillery.

If even with all these challenges facing the Ukrainian "floating artillery" the russian forces could do nothing about Ukrainians shelling the island, it means the Black Sea Fleet of the russian federation suffered another yet unnoticed fiasco against the Ukrainian Army because it was unable to create an effective "no-go area" 50 km around the important stronghold in the northwestern Black Sea.

Perhaps, the authors of The New York Times intentionally gave the example with this earlier unknown story about Caesars on barges, and then reminded of the famous episode of the russian fleet’s flagship Moskva going down, hit by Ukrainian "Neptun" missiles.

At the same time, we cannot help but recall that Caesar was not the only artillery piece to annihilate russian forces on the island but a Ukrainian-made "Bohdana" system, too. And the latter did not even need any shenanigans with barges: it fired straight from the Danube Delta. The video of that has already gone down in the annals of this war.

Read more: The US Organized Repair Base for Artillery from Ukraine in Poland - NYT 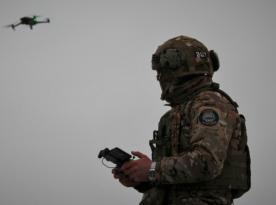