Since almost the earliest days of military hostilities in Eastern Ukraine, the unmanned aircraft system (UAS) A1-SM Fury (a product by Athlone Avia, a privately-run defense technology firm based in Kyiv) helped the Ukrainian military defeat and destroy over a dozen hundred important targets.

The A1-SM Fury is currently operational with the National Guard and the Armed Forces of Ukraine. The use of Fury UAVs in real-world combat scenarios has driven Athlone Avia toward developing a loitering munition drone “Thunder” for destroying targets hidden in defilade positions located deep in hostile territory.

“Donbas” Battalion - an irregular pro-government unit deployed in the Anti-Terror Operation against Russian-sponsored insurgents in Eastern Ukraine -- was among the first to receive the Fury UAS in June 2014. The “Fury” capability had come as a welcome response to the acute need for military drones by forces on the frontline.

In 2015, Athlone Avia developed the Fury technology further to create the new A1-SM evolution using the feedback from real-world combat operators. The A1-SM Fury has now become the core UAV in combat/military use in Ukraine. In July the same year, the new Fury was officially adopted for use by the National Guard of Ukraine.

The A1-SM Furia, after having passed governmental trials and user evaluation during gunmen’s drills, was demonstrated to potential customers from the Armed Forces in 2016 and won high praises from top military officers at the General Staff and Headquarters of the Rocket and Artillery Forces. Moreover, the Armed Forces’ Central Scientific Research Institute had rated the A1-SM Furia the highest among the other UAS technologies developed indigenously in Ukraine.

Those high appraisals are well substantiated; the “Fury” system is able to adjust artillery fire without any compromises and in full compliance to the demands and requirements of modern warfare, and it as good in terms of performance as world-renowned brands. The Ukrainian drone offers the capabilities for automatic calculation of the target’s coordinates and autotracking of targets, of which none of the Ukrainian counterparts was capable at that time. The drone’s command and control links for both main and backup use verified their reliability during two years of operational deployment in the Donbas theater.

The A1-SM "Fury" received a new, forward mounted optical system offering 360-degree freedom of use in the longitudinal axis to allow for more user-friendly operation for the pilot and gunfire spotter. There is a snapshot camera integrated into the wing, which would capture images at a preset frequency rate.

The A1-SM Furia uses Athlone’s proprietary software on Linux platform. The software facilitates and speeds up the work of gunfire spotters, ensures more effective and efficient engagement of targets and helps improve sustainability among gunman crews. The A1-SM Fury is operated by two people – one for the drone itself, and the other to run the gunfire spotting missions.

C2 and telemetry links are subdivided into sublinks for enhanced security. To prevent the possible disclosure of friendly positions, the video data transmitter is turned on/off remotely from the ground control station (GCS). Therefore, in practice, enemy interception of a video data link while over the enemy territory will have little if any effect on the progress of the combat operation.

In addition, the Fury can switch over to GPS independent navigation when it detects a GPS spoofing attack.

In this unmanned aircraft system, there has been implemented a data transmission capability projected into the integration with the Rocket Artillery Forces’ future gun-fire control technologies. The capabilities of modern radio systems already operational with the Ukrainian army, such as Aselsan or L3Harris, support the transmission of data from the "Fury" drone to the "Obolon" system.

Fury’s functionality includes automatic calculation of the target’s coordinates by designating the target to the ground control station. The target’s coordinates can be determined also by means of object orientation and geographically referenced video footage; this method is almost as effective as automatic calculation, and even surpasses it in some cases when it comes to accuracy.

The drone's datalinks are fully encrypted for highest security.In particular, the A1-SM "Fury" has a capability allowing for data from each preceding mission, including logs and photo/video contents to be deleted by GCS operator. Beyond that, the logs are encoded such as to be unreadable by software other than Athlone’s.

The Company has continued expanding the functionality of its unmanned systems by adding new capabilities, especially for radiation detection, SIGINT/COMINT, etc. Thus, Athlone Avia accepted an offer from Sparring-Vist Center, Lviv, to equip the Fury UAV with a radiation detector sensor.

The A1-SM is the first UAV system developed privately in Ukraine which has been adopted by the Ukrainian military (relevant directive by the Minister of Defense was issued as number 115 on April 9, 2020).

Operational experience gained by Ukrainian government forces with “Fury” UAVs motivated Athlone Avia to draw up a draft design and operational requirement document on a loitering munition drone. Named “Thunder”, the drone was designed with a mission to defeat and destroy targets located in close vicinity to residential buildings, with minimum risk to nearby civilians or civil infrastructures.

As regards flying performance capabilities, they are fairly competitive with a cruising speed of ~120 km/h, which is sufficient for the drone to cover a 30km distance to a target area within 15 minutes under normal weather conditions. The drone can stay aloft for up to 60 minutes, which had been validated during test flight missions. The first-evolution configuration of the drone is designed with a take-off weight of 10 kg, including its 3.5kg warhead payload. The munition will be available with warheads of several different types. Work is now underway on a Fuel Air Explosive (FAE) warhead weighing 10 kg, but other warhead types, including inter alia HEAT and HEF are also under consideration for this application.

The munition will be guided semi-automatically by optical, television or IR guidance heads, which will be swappable as needed depending on the visibility and weather conditions. Guidance to the target would be carried out by way of on-board processing of video signal within the carrier drone, its flight path being updated automatically till impact. The Thunder would use a human operator to locate targets, then operate autonomously till the mission is accomplished. It would be able to operate autonomously while assessing the weather conditions in the target area, approaching the aiming point (with minimum cross-wind component), and diving at the target.

The Thunder drone has a biplane design with two sets of X-shaped control surfaces on a front fuselage extension mounting an EO guidance system. The selection of said design enabled achieving an optimum between the controllability performances of the drone while in horizontal flight and diving at the target. The aforementioned aerodynamic design is perhaps the only one suitable for this application.

A multirotor aerial vehicle will be used as launch platform for the “Thunder” munition drone. This enables the launch to be carried out from any suitable site, be it even a household’s yard. The multirotor vehicle would lift the drone up to 500 m altitude from where the latter would separate and begin flying to the target area. The multirotor would then ascend to ~1,000 m and stay there to act as a transmission relay. This altitude is high enough for sustained video streaming from the drone at ranges of 30-40 km.

The Thunder drone features several solutions adopted from the A1-SM Fury technology. This is above all an automatic target tracking system that allows a ground operator to automatically keep the target within his field of view by just pressing a single button while assisting to adjust counter-battery fire. A similar algorithm will be used also for aiming the loitering munition at a target.

Athlone Avia is looking at two configurations for its loitering munition drone. One is a man-portable configuration fitting into three transport backpacks weighing 15 kg each, rated collectively for carrying three drones with a full set of miscellaneous equipment by a crew of three. The other is a vehicle-mounted configuration, but this will be implemented if Ukrainian armed forces or other customers require or wish so. 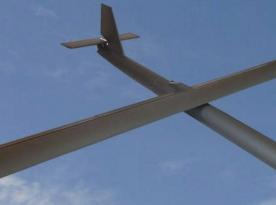 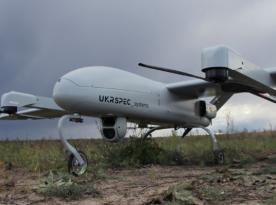